Providing power backup during power outages or working as a power source in a remote area is what generators do. It’s an innovative device that helps get reliable electric power when the power goes out.

However, sometimes you may encounter problems with your generator, which will prevent you from getting electrical power. And one of the common issues is not getting power after turning on the generator.

Well, nothing can be more frustrating than when your generator runs but no power. This issue can occur due to several factors, but luckily you can easily fix this condition. All you have to do is follow this article to get reliable guidance.

Why Does My Generator Runs But No Power Produce?

There are many types of generators that are used in home, office, remote areas, and even for many remote services. And when it’s about remote services like mobile detailing generator is one of the crucial devices that work as a power source.

Not getting power even after turning on the generator can happen due to several reasons. And if you want to know about those reasons in detail, follow the section below:

One of the most common reasons for not getting electric even after turning on the generator is because of a lack of residual magnetism. The generator works by moving electrical current through a magnetic field.

And magnetism is vital in the process of power output that allows electrical energy to pass through to release energy for use. However, the residual magnetism can be lost due to several reasons, and some of the reasons are:

These are some common reasons that will cause loss of residual magnetism of your generator.

Another common reason to face no power issue even after turning on the generator is the tripped breaker. It’s a safety feature that works to detect overload and voltage spikes.

If you connect a more powerful device that draws more power than the breaker is capable of, an overload will happen. And overload can lead to overheating and many potential damages. In that case, the circuit breaker disconnects or trips the power supply to trims potential threats.

Defective or faulty breaker is another core reason that causes no power even after turning on the generator. However, how do you know if the circuit breaker is in good condition or not?

In that case, you have to take help from a multimeter and by testing the resistance of the lead wire connection. If the multimeter shoes Infinity or OL, then it’s time to replace the breaker.

Faulty AVR or automatic voltage regulator is another major aspect of a power failure after starting the generator. Wondering how to identify the defective AVR? Here we’ve included some signs that will let you know about AVR’s condition:

Bad or defective capacitor is also one of the reasons that you’re not getting any power even after turning on your generator. So how to know if there is a problem with your capacitor or not? In that case, you’ll need a multimeter and then follow the section below:

Bad or worn brushes are another key reason that you’re facing no power issues in your generator. So how to check if there is an issue with the brushes? Here is how you can do it. Have a look:

While checking the brushes, if you notice burn marks or any unusual thing, that means you need to replace them.

Last but not least, a bad outlet is another reason to face no power with your generator even after turning it on. Well, the generator’s output can go wrong for several reasons, and you can check its condition through a multimeter.

Start the generator, then the AC power, and utilize the multimeter to check the AC voltage. If you’re not getting any reading, that means you need to replace the outlet. Here is how you can check the voltage through a multimeter.

How To Fix Generator That Runs But No Power Produce

Above we’ve explained some of the common problems that can cause no power after starting your generator. And in this section, we’ll show you how to fix these issues and again get electric power from your generator. Have a look: 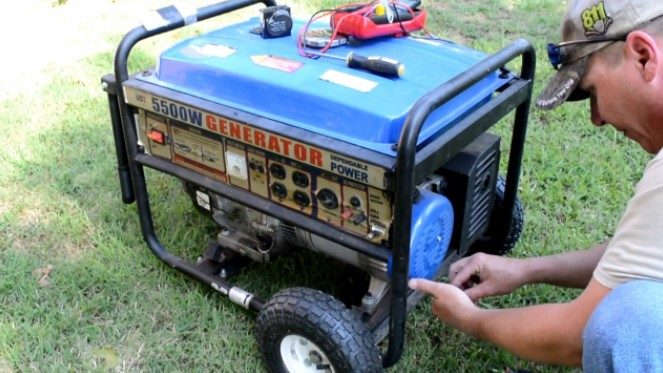 There are many ways that you can follow to recharge your generator’s magnetic field. However, here we’re going to show you the easiest way which is using an electric drill. Here is the procedure:

Remember to wear safety gloves while fixing the residual magnetism of your generator. And also, you can take help from this video to understand the process more easily-

If there are issues with your circuit breaker, then you can follow the below-mentioned steps to fix it. Have a look:

If there is an issue with your generator’s circuit breaker, then replacing it is mandatory. Here are the steps you can follow to replace the defective breaker:

Fixing defective AVR is relatively easy, and by following the section below, you can easily do it. Have a look:

Well, the replacement process is relatively simple. Purchase the right brushes based on your generator and then simply replace them with the old ones. Or you can take help from this video to clear your confusion:

Many people find it complicated to replace the generator outlet. If you’re also one of them, follow the section below:

Secure the outlet housing properly and reattach the spark plug. And now try to turn on the generator and check if you’re getting power or not.

As you can see, there are many things that will cause no power even after turning on your generator. Here we’ve included some of the most common reasons that contribute to no power issues.

Alongside including the common issues of not getting power from your generator after starting, we’ve included solutions to these issues. All you have to do is identify the issue and fix it according to the provided guidance.

In short, don’t panic when you face issues like your generator runs but no power, and follow our mentioned solutions to fix this annoying condition. We believe our provided guidance is good enough to fix no power issues in your generator.

Affiliate Disclosure: As an Amazon Associate I earn from qualifying purchases.