House & Beyond is reader-supported. We may earn a commission through products purchased using links on this page. Learn more about our process here

Do you want to buy an electric generator, but whenever you ask, “what size generator do I need,” this crucial question is greeted by an echo of silence?

Well, getting a generator that can handle all of your power needs can be one of the most critical aspects in the effective management of the emergency operations of your business and your home during an outage.

If your generator cannot meet your specific power requirements, then it is simply not doing anyone any good. The unit may get damaged by overload or overvoltage. The generator itself may damage the equipment connected to it. Unfortunately, determining the generator size you need is often very difficult and involves considering several factors.

Choosing between single-phase, three-phase, kW, KVA, starting and continuous power can be confusing. This guide will try to answer the most frequently asked questions.

What size generators are there?

Advances in technology have allowed small sets to present functionalities that previously could only be possible in larger generating sets. In this, the world of electric generators has not been left behind. Their sizes have changed a lot over time. There are now equipment of reduced dimensions with all kinds of benefits. So, when talking about the generator size, the physical size of the generator doesn’t matter, rather the technical data which include the surge and running power, among others.

Before determining the generator size you need, you have to first choose the type you want: a portable inverter generator, a portable conventional generator, or a standby or whole-house generator? The size range of these generators vary.

However, portable generators can be categorized into two, that is, the inverter generators and the conventional generators.


Pros and Cons of Inverter Generators – Consumer Reports
Consumer Reports shares what you need to know about inverter generators. These machines come at a premium price, but they run longer, quieter, and more efficiently.

transform energy from AC to DC and back to AC. This process allows a sine wave to be generated (the value of the alternating current voltage over a continuously variable time). This wave is practically perfect and far superior to conventional generators. This technology allows the regulator to emit a stable electrical current that neutralizes the vulnerability of electrical appliances and household appliances to scattered and poor quality sine waves.

These types of electric generators are used as a power source in blackouts. They also routinely support power grids in two ways: the inverter generator provides power grid support and savings.

It offers the highest current quality today, being compatible with practically all machines on the market.

However, it’s not recommended for welding machines, construction, public works, etc. Inverter electric generators have a power rating of around 1,000 watts to 7,000 watts. However, the 2,000 watts generators are the most popular here.

This is the oldest, cheapest, and simplest system. Electricity is regulated by discharges from a capacitor that balances the voltage.

The energy is of acceptable quality as long as there is a balance in consumption. When a load is connected, the generator deviates its voltage and frequency, going up and down until after a few moments they end up balancing.

They can be used for resistive loads, tools, stoves, radio, etc. In general, they are ideal for any equipment that is not sensitive to the voltage variations described.

Conventional generators have a size range starting from 2,000 to 4,000 watts. Meanwhile, the 10,000 watts models are the most powerful and can be as powerful as some standby generators. 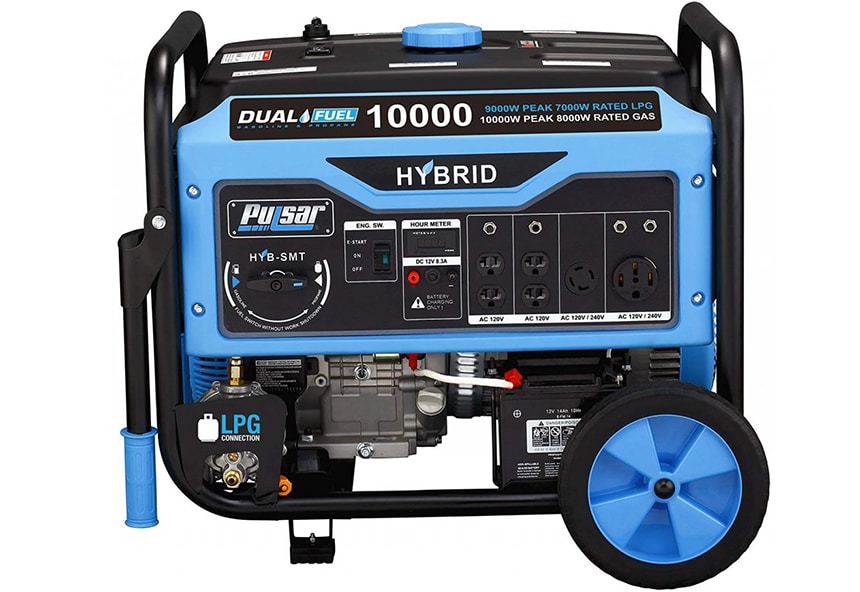 , also called whole-house, fixed or emergency generators, are larger sized generators that can start automatically, following the detection of an outage. Hence, they are suitable for emergencies and organizations such as hospitals, banks, small manufacturing companies, or any organization which stores and processes data and need an uninterrupted power supply.

Perhaps you have heard that a small generator can never be used for industries, but this is far from the reality since the size does not matter but the power it has.

In other words, the size of a standby generator is secondary, unless you are looking for a portable model to take it from one place to another, what is really important is the power it offers, which will determine its use and capacity.

Most standby generators can be used in the home or small industries, to large-scale appliances that exceed 50 kW and can reach three megawatts, for industrial use.

What exactly do you want to power?

Perhaps, you need a small portable generator for your sensitive electronics. Then, an inverter generator would be a perfect fit. If you want a generator for industrial use, choose from the range of the more powerful conventional generators with GFCI-protected outlets. If you’d like to power your whole home, business, or industry during outages, a standby generator would be the best. They usually turn on automatically and are powerful enough for most households and commercial setups.

The difference between starting and running watts

If you’ve gone to an electronic store or Amazon to check out what they’ve got and what you could choose, in the technical data or sheet provided, one specification which should be familiar to you by now is the running and starting watts. What are they and what do they mean?

What are running and starting watts?

Also called maximum, peak, or surge watts, this is used to indicate the power rating your generator will read during startup time. That is, all motor tools produce higher output during startup, which then normalizes to a lower power rating, which is known as running, rated, operating, or continuous watt. The switch from starting to running watts usually occurs in seconds. This is usually important for inductive equipment with surge powers such as the dryer.

How do I pick the right size for me?

Next, we will give you a basic guide so that you can determine the size of the equipment that you should buy. This size must be higher than the surge power or load of the equipment inside or outside your home or business.

If you do not know the amount of energy you need, it will be difficult to refine the list of generator models that best suit your needs. But don’t worry, it is very simple to do it, you will only have to:

With all the data taken in the previous step, a general summation is made either in kW or MW.

Convert the result to the required unit. This is possible, especially if it is equipment purchased in other countries, that you find the necessary power expressed in amps, another unit to measure electricity. The conversion can be done this way:

Below in this section, you’ll find a more detailed guide on the various units of measurements used in electrical equipment.

Read carefully the technical characteristics of each model and write down the models that match what you need. Do not forget to take into account the type of fuel it will use, the number of liters or gallons you need, the hours it works for and, finally, the size of the equipment, especially if you are looking for a compact model to take from one place to another.

Physical units and their conversions

As mentioned earlier, you must know the physical units related to the electrical consumption of the appliances, to be able to carry out the calculations correctly.

Taking into account the definitions and relationship of the physical units already mentioned, we will go on to present an example:

Suppose we have a laptop with 1A at 220V, applying the formula to calculate the electrical power, we will obtain the consumption data of this device thus: 1A x 220V = 220W.

Usually, electrical equipment has a label or sheet where its electrical power is indicated, so we would not have to calculate it. However, there are also tools and equipment that only indicates its amperage (A) and its voltage (V), in which case we must apply the indicated formula to know the electrical power of said equipment.

If one or more of the devices that we have in our home, has high electrical power, this is expressed in kW or MG. In either case, we would only have to convert these values to W, using the equivalent values.

The following table shows some devices, with their respective electrical power:

How to calculate appliances with inductive power

Some electrical appliances have rotary motors for the moment of starting. And at that moment, they require inductive power, which is much higher than the electrical power they require to function, once they have started.

As mentioned earlier, examples of this equipment are dryers, washing machines, refrigerators, pumps, among others (see the devices with * in the table above).

For some of these devices, the inductive power they require is three or six times higher than the standard operating power. This is why the calculation of electrical consumption for these types of equipment must be different.

Depending on the type of startup of the equipment, its consumption must be calculated:

Let’s take the following examples as a guide:

To facilitate this calculation, we will show in the following table the values corresponding to the inductive power, according to the horsepower (HP) of some devices.

How to calculate the electricity consumption in your house?

Once the list is obtained, we must ensure that all the electrical power values are expressed in the same unit (watts (W), for example). Otherwise, we must make the relevant conversions, to continue.

Having all the values in the same power unit, we must add them to obtain the total value. In the following table, we will show an example:

The sum of the power required by the appliances is 18,200W.

In conclusion, you need an electric generator that covers 27.3 KVA. And the best type of generator for this is a whole-house generator.

And finally, note that the calculation and the final result seen in the last section is just for illustration alone. While the recommendation will be applicable for most homes, you would need to do your calculations following the illustrations given. We’ve tried our best to help you answer the question: what size generator do I need? We hope this article will help you to clear up any doubts regarding the size of the electric generator that you will need for all your equipment.

Consumer Reports shares what you need to know about inverter generators. These machines come at a premium price, but they run longer, quieter, and more efficiently.

A standby generator is a back-up electrical system that operates automatically. Within seconds of a utility outage an automatic transfer switch senses the power loss, commands the generator to start and then transfers the electrical load to the generator.